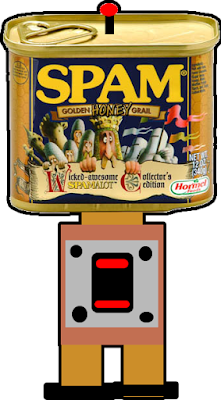 Amanda's version of a Spam-Bot
Apparently it wasn't a Zombie outbreak that I should have been worried about but an attack by the Blogger Spam-Prevention Robots who crawled my blog and then erroneously reported it as having the characteristics of a spam-blog thereby resulting in it being locked since late Thursday night. Not only was my blog a victim of these misguided robots but Sandee at Comedy Plus and Sarge Charlie were also put into lock-down along with what appeared to be a host of other innocent bloggers.

Apparently this is what happens when technology runs amok and something goes haywire in the system. Google offered the following statement to those people who were bombarding the Help Message Boards with questions as to what happened and when was it going to be fixed -

"We've noticed that a few users have had their blogs mistakenly marked as spam, and wanted to sound off real quick to let you know that, despite it being Friday afternoon, we are working hard to sort this out. So to those folks who have received an email saying that your blog has been classified as spam and can't post right now, we offer our sincere apologies for the trouble."

A few users? Are they kidding? Of course, in the big scheme of things there are probably almost as many Blogger blogs as there are grains of rice in China so I guess that even if several thousand got locked out, that would still constitute "a few"!

Still, all of this teeth-gnashing and rending of hair over not being able to write a post along with my pleas and exhortations to the good folks at Google to restore my blog to its previously unlocked status weren't for naught as it taught me a very valuable lesson ... "Thou shalt back-up thy blog in case thou gets it deleted." I can't even imagine losing two years' worth of work in the blink of an eye - particularly the rather inaccurate eye of a Blogger Spam-Prevention Robot! - so I went over to WordPress, created a new blog account there, and imported all 1,122 posts along with 11,405 comments. Easy-peasy--lemon-squeezy - next thing you knew I had everything all backed up and in reserve in case the unthinkable happens at Blogger and I wake up one day to find out that Are We There Yet?? has turned into Come and Gone!

I hope that everyone who got locked out during this Attack of the Blogger Spam-Prevention Robots has been restored to their proper status and that this sort of thing doesn't happen again anytime soon. We bloggers just get way too panicky, stressed-out, and cranky when we can't blog! It's even worse when we can't blog about why we can't blog! Trust me on this one!
Posted by Linda at 8/02/2008

Email ThisBlogThis!Share to TwitterShare to FacebookShare to Pinterest
Labels: blogging