Beginning a Journey Around The Sun 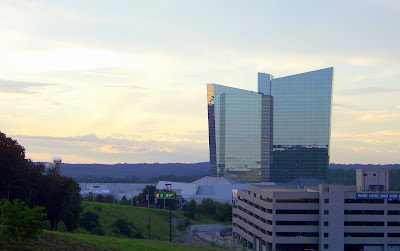 A few weeks ago I posted this picture of the Mohegan Sun Casino and Hotel as part of my Big post for Mo's Manic Monday Meme. You may remember or you may not. You may also remember that I briefly mentioned that I would be starting a new part-time job here once I had gone through licensing and all that fun stuff - or you may not! It's okay if you don't remember, I have trouble remembering what day it is half the time so I'm sure not going to hold a leaky memory against anyone else!
At any rate, after attending Orientation and receiving my gaming license from the State of Connecticut Gaming Commission, I had my first training shift this past Tuesday evening in the communications center for Mohegan Tribal Public Safety. Even though I have been a dispatcher for more years than I care to count at this point, I must confess to being a tad bit good deal nervous when it comes to learning this new position.

At American Ambulance I dispatch ambulances and wheelchair vans - that's it - nothing else. At Mohegan Tribal I will be dispatching not only EMS personnel but also police and fire personnel as well as monitoring cameras, alarm systems, elevators and escalators, parking garages, and the gas station along with a whole host of other things that I can't even begin to remember right now! Even though I have been a Police and Fire Dispatcher in the past, that means virtually nothing to me as I begin this new job because as far as I'm concerned, I'm a rookie - plain and simple!

Along with myself, two other dispatchers were hired on for per diem work with the Tribe - one a fellow dispatcher from American and another a dispatcher at Station M in Montville and we all need to go through a good 40-hour training period - at the very least! John, the dispatcher from Montville, also came in for the training shift with me on Tuesday night so together we had a chance to be overwhelmed at the magnitude of the new job we had taken on. 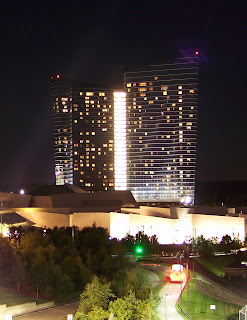 I have a slight advantage over John and Kevin, my fellow dispatcher from American, in that I worked at the Mohegan Sun once before as a blackjack dealer and I'm at least a little bit familiar with parts of the casino that they aren't. As Lisa, the lead dispatcher, gave John and I a walking tour Tuesday night it was nice to see that some things hadn't changed in the 6 years since I'd been there but there was a lot that had. The Sun is just about ready to open their latest expansion - the Casino of the Wind - and there's still a lot of construction going on, especially in the area where they are building a second hotel. To remember where everything is will definitely take some time!

During my next training shift (today from 6 a.m. to noon), I'll be spending a couple of hours walking the complex with one of the Fire Inspectors as he shows me the ins and outs of the entire complex including the new construction, back-of-the-house areas, and any place else he thinks I'll need to know about. I suspect it will be more than a bit overwhelming but I'm looking forward to it as the Inspector I'll be with also works as a part-time dispatcher at American and he is the King of Snark as well as one of the funniest guys I know. Don't tell him I said that, though, I don't want him to get a swollen head though from what Lisa was saying the other night I get the feeling that he may already have one as he's not "just a" Fire Inspector at the Sun but more like a Fire God. He's been there since the place first opened and he knows where everything is - everything. It's hard not to be impressed.

In addition to knowing the above mentioned Fire God and having worked with Lisa when she was a part-time dispatcher at the Norwich Police Department many years ago, I have the pleasure of being able to work once again with some of the guys and gals that I have dispatched in the past. Seems like when a lot of officers retire after their 20-years at Norwich PD, they head down and become Tribal Police Officers at Mohegan - Artie, Joe, Diane, Elaine, Mike, and Todd are all there as well as the man who used to be my very first Lieutenant at NPD - Frank. He's been the Commander at Mohegan Tribal PD since its inception but seemed just as I remembered him when I went in for my interview (though maybe a tiny bit grayer!). In addition to the officers I know, there are also several paramedics I've had the pleasure of working with - Mark, Lindsay, Jeff, and Eddie - who work for the Mohegan Tribal Fire Department. 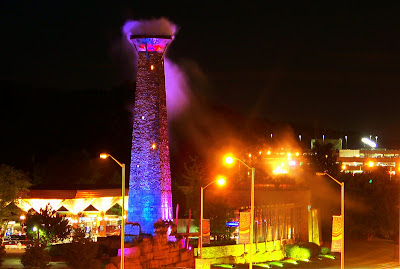 The Mohegan Mobil Station as seen at night
I'm looking forward to being a police dispatcher again and while having some familiar faces and voices at my new job will be great, I still think it's going to be rather intimidating for quite some time. It's always been my contention that anyone who takes on a dispatch position should treat that position with respect and a bit of nervousness as every dispatch center is different and no matter how long you've been doing it, you've always got something new to learn. I figure I've got plenty to learn and am plenty nervous about it but to me that's a good thing. Nerve-wracking but good!
Oh, and I almost forgot! One of the best things about all this is that because I am an employee of the Tribe and not the Casino itself, I can still gamble there should I choose to! The only stipulation is that I don't do it on any of my breaks but I'm sure that won't be a problem as I only test my luck, or lack thereof, every so often but I do like to go with my Mom from time to time plus the Beach Bunch that I'm spending a week with in September have expressed an interest in going to the Sun. I've shown it off to Mo and Mags once last October but I'll be happy to show it off again to everyone in September as the Sun beats "the wonder of it all" every time as far as I'm concerned! And I would say that whether I worked there or not!
Posted by Linda at 8/22/2008