Return of the Prodigal Daughter 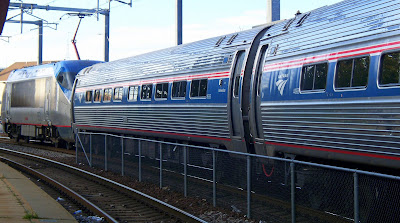 There it is ... the train that brought back an end to my peace and quiet at 6:20 p.m. yesterday evening - right on time as a matter of fact - when it stopped in New London long enough to discharge a good number of passengers including Amanda, home from her summer vacation in New Jersey.

After stopping in New London this train was going to continue making its way north and eventually complete its journey at North Station in Boston which is just a t-ride or two away from my friend Ms. Maggie Moo who was having her very first "Supper Club" get-together at her apartment last night.  Don't think I didn't wish that I was getting on that train and going up there to join the party but sadly the only place I was going was back to Norwich with my newly returned daughter (who just happened to be starving of course!) and her two new pet lizards.

Yep, pet lizards ... you read that right!  Amanda had told me the other day that she was bringing back a lizard but as it turns out, she brought back two as Darci seemed to think Amanda would do a better job raising the one she had gotten than she would.  Uh-huh.  Lizards.  Right ... I guess it could have been worse, it could have been snakes - in which case she could have left them on the train and sent them up to Mags' place for dinner as they wouldn't have been coming home with me! 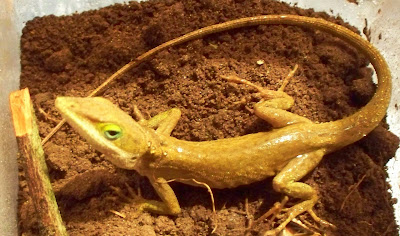 This is Evra and he was quite nice about posing prettily for a picture unlike Verde (Spanish for green) who decided that she was not going to have her picture taken at all and avoided that by clinging to the roof of her cage out of camera shot.  Great, not only did Amanda bring home lizards, she brought back a temperamental one to boot!  Perhaps she'll settle down and I can get a picture another time; I can, after all, be quite persistent when need be!

Amanda seemed to have a wonderful time while she was visiting Darci and while there she attended a Renaissance Faire, did a lot of shopping, and even got to go look at some art in Trenton (honestly I never knew that they even had art in Trenton but it's been a long time since I've lived down that way and a lot has probably changed!)

Speaking of things that have changed ... 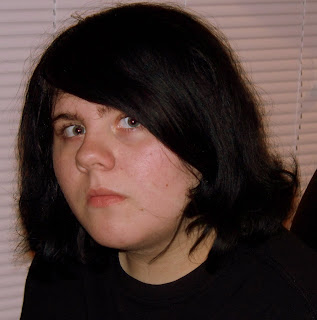 Yep, it's back to black for Amanda's hair and except maybe for needing a cut, I think it looks pretty good but maybe that's because it's all one color for a change and not a shade I need to wear sunglasses to look at!  Darci actually did the dye job for her and for her first time, I'd have to say she did darned good.  Thank you, Darci, and I hope that Amanda didn't give you as hard of a time with her hair as she usually gives me!

After stopping in at the local exemplary pizza place right up the road from my house to feed the poor starving child we came home where she wasted no time in booting up her beloved computer and filling the house with music.  Yep, she's home but that's okay, I kinda missed her (just don't tell her that, okay?).
Posted by Linda at 8/28/2008

Email ThisBlogThis!Share to TwitterShare to FacebookShare to Pinterest
Labels: Amanda