With barely a day to spare as the contest list closes on Wednesday afternoon, I have finally come up with an entry for Roger's Creative Photography Contest #9!

With Amanda away in New Jersey at Darci's, you would think I'd have more time to spend on the computer but such is not the case as I have picked up some extra hours at work this week covering for people who are on vacation and the like so my time at home and on the computer has been somewhat limited. That didn't give me a lot of time to pick a photo for this week's contest but after some debate I decided on the following picture that I took this past Saturday night after spending a lovely afternoon/evening with Patti, Ralph, and their lovely daughter, the Lady A. 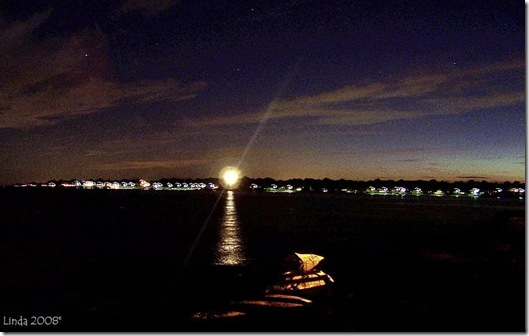 After parting company, I decided to head down to Eastern Point Beach which overlooks the Thames River where it meets the Long Island Sound in Groton, Connecticut. It was getting close to 9:30 at that point and I wanted to try my hand at some more night photography. This picture shows the light from the New London Harbor Lighthouse reflecting on the Thames River across to where I was standing on the rocks at Eastern Point. If you look closely you can even see some of the stars that had come out in the night sky. It was a beautiful night out and I think this picture reflects that.

I've really taken a liking to going out into the dark to see what my camera can capture but I guess if I'm going to be doing a lot more skulking around in the shadows, perhaps I should think about taking someone along with me - just in case. Even though I was a police dispatcher for years and know that there are some pretty undesirable people out there walking around, I tend to forget that sometimes and think of nothing of going out poking around by myself in the dark. Not too smart I suppose but I do enjoy the peace and quiet of just myself, my camera, and the night sky.