While having an IM conversation with my friend Mo last evening we were talking about photography a little bit and in particular about the picture that I had submitted for this week's Creative Photography contest - which I lost again, by the way, but that's because Sanni had a truly fantastic picture that took the prize this week! Oh well, there's always next week, right?

Anyhow, Mo had mentioned that he hadn't thought about lightening up dark pictures like I had with that picture and I told him that it was pretty cool to take night pictures and then see what pops out of them once you get them home and put them on the computer. That then led to a conversation about some pictures I had taken in one of my favorite local haunts about two years ago when I first started blogging. Rather than have you read the whole boring post, I decided to repost the pictures here for you to see. Both pictures were taken at the Yantic Cemetery here in Norwich shortly after nightfall when I was feeling particularly brave and decided I wanted to schlep around in a cemetery around dark!

I took this first picture towards the back of the cemetery and it is the Steadman Family plot. When I first got home and looked at the picture it was nothing but a black square but when I lightened it, orbs popped out all over the place just like the Steadmans were having a champagne party! I'm pretty sure that they aren't dust particles as I have other pictures from the same place in the cemetery that show nothing but graves and a dark sky. Needless to say, I about near fell out of my computer chair when I looked at this! 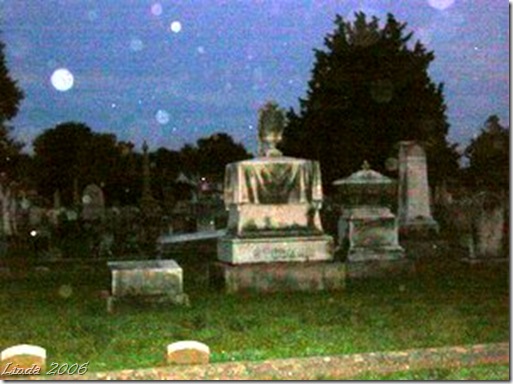 This next picture was taken more towards the middle of the cemetery but I forget the name on the big gravestone; it, too, was a black square until I added fill light. My friend Miz Cyn insisted that if you blew the picture up and looked towards the bottom of one of the stones, you could see what looks like a head rising from the ground as well as faces in the tree. I did just that, saw what she was talking about, and never did it again! I did, however, go back to the same cemetery the next night around the same time and took the same pictures and got ... nothing out of the ordinary! 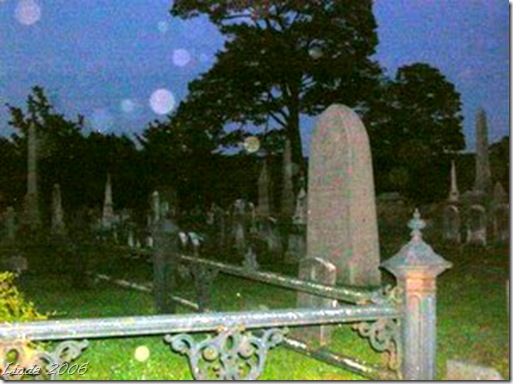 I haven't been out to the Yantic Cemetery to take any night pictures yet this year so I think a journey may be in the offing before too long, especially as summer comes to an end and fall approaches. This cemetery is one of my favorite places in the fall due to all of the beautiful trees with leaves that change into glorious colors. Guess I'll put that on my list of things to do! ... Hey, Amanda, want to go for a ride sometime?
Posted by Linda at 8/07/2008