Scaring Up a Good Time in Salem 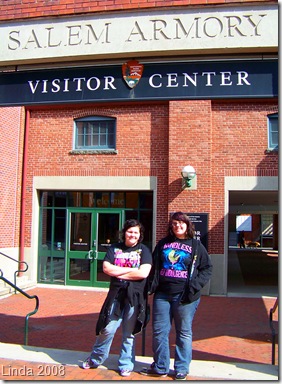 For those of you who guessed that our mystery destination yesterday was Salem, Massachusetts - congratulations, you were absolutely right! I had originally wanted to go to Plimouth Plantation but both Amanda and Darci really wanted to go to Salem and, it being October, how could I resist? Well, I probably could have but it turns out I didn't want to! When I mentioned it to my friend Amy she asked if she could go along, too, as she'd always wanted to go to Salem and is fascinated by the Witch Trials that occurred there in 1692 which resulted in the deaths of 19 accused witches by hanging and 1 (Gills Cory) by a form of torture called peine forte et dure, or being pressed to death.

Salem is only about 120 miles northeast of Norwich so it isn't a bad drive and the day was beautiful even though it was a little warmer than I anticipated. There was some foliage to look at as we proceeded north but not anywhere near as much as I would have liked and Salem itself had very little to speak of. I sure hope that doesn't mean we're going to have one of those years where the leaves just fall off the trees without changing first! We New Englanders wait all year for the beautiful colors of Autumn so it's a major disappointment if it doesn't happen! 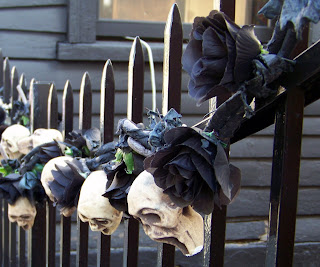 Anyway, I digress ... we arrived in Salem around 1:00 p.m. and made our first stop the Visitor Center at the Salem Armory where we watched a movie about Essex County where Salem is located. The movie was good because it covered not just the infamous Witch Trials but also the other aspects of Essex County - including maritime and manufacturing. The area really is a fascinating part of America even if you aren't into the supernatural - which is the main draw for most people to flock to Salem.

Naturally we walked through The Burying Point, which is the second oldest burial grounds in America established in 1637, as well as walking through the Witch Memorial located next to the burying grounds before heading over to the Hawthorne Hotel for a nice lunch of Tavern Burgers, root beer, and dessert for some! I was the only one who passed as I was quite full from lunch but it sure looked good!

After lunch we split up with Amy and the girls going over to the Salem Witch Museum while I set out with camera in hand down to the waterfront to see what I could find. Trust me, I have a ton of pictures and a lot more to this story but I've got to go to work and have run out of time today as I kinda slept in this morning being that we didn't get home until almost 1:00 a.m.

In the meantime, take a gander at this photo below ... we went on a Haunted Footsteps tour and this is one of the shots from that. If you want to get a better look at the orbs, go ahead and bigify it but they're pretty easy to see as it is! Come on now, you can't go to Salem without looking for ghosts, right? 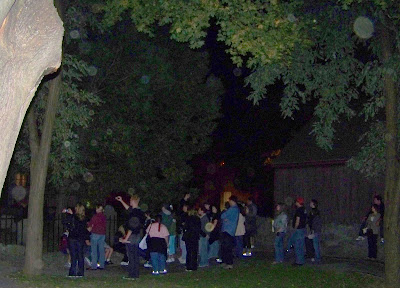 For now I have to scare up my uniform and head into work but I'll post more when I get a few free moments to organize the 336 pictures I took! Not to worry, I won't frighten you with all of them!
Posted by Linda at 10/10/2008