Meanwhile, Back in Salem ... 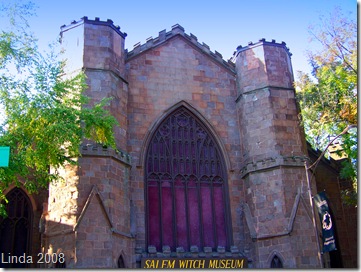 It's hard to believe that it's already been a week since Amanda, Darci, Amy, and I piled in the car and made the 2-hour trip north to Salem, Massachusetts but suddenly it is. Where does the time go?

At the end of my last Salem post I was preparing to part company with the other three who wanted to go to the presentation at the Salem Witch Museum while I ambled down to the waterfront to explore and take pictures. From where I left Amy and the girls it was a less than 10-minute walk to Derby Wharf so we agreed to meet back up on Salem Common after their show at the museum was over. Even though I find the witch trials to be quite fascinating, I had already been to the Salem Witch Museum a few years ago so thought my time would be better spent checking out other parts of Salem.

Crossing the Salem Common I cut down Orange Street past a number of old houses that were built by sea captains back in the day when Salem was a Maritime Mecca of New England and came out across from Derby Wharf where the Friendship of Salem is docked as part of the Salem Maritime National Historic Park. 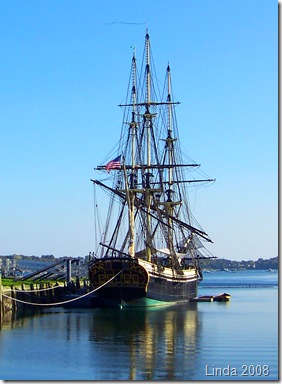 The Friendship is a reconstruction of a 171-foot three-masted Salem East Indiaman built in 1797 and is the largest wooden Coast Guard-certified sailing vessel to be built in New England in more than a century. Tours are available on-board the Friendship and even though I would have loved to have gone on-board, I didn't really have the time that I would have needed to check out this very interesting part of America's past.

Across the street from the Friendship stands the 1780 Hawkes House, which was used as a warehouse for Revolutionary privateers until purchased by boatbuilder Benjamin Hawkes in 1801; the Derby House - home of America's first millionaire, Elias Hasket Derby - which also happens to be the oldest brick house in Salem which overlooks the wharves and warehouses built around the same time; and the 1818 Federal Customs House where between 8 and 12 percent of the nation's revenues were collected during the early 19th Century. 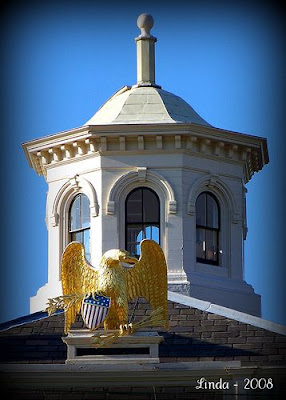 The US Customs House is where author Nathaniel Hawthorne worked between 1847 and 1849 as a Customs Surveyor. The introduction of his book The Scarlet Letter, which Hawthorne wrote while living in Salem, focuses on the Custom House and includes an extended description of the building, its interior, and the people who worked there. I guess I've found another book I need to add to my re-reading list!

From Derby Wharf I continued to follow the red line that Salem has provided for walking tours, much like the red line of the Freedom Trail in Boston, down Derby Street towards the location of the Turner-Ingersoll Mansion or as it's more famously known - The House of the Seven Gables - which I did a short post about on Tuesday.

I didn't have time to tour the house or the 1750 Nathaniel Hawthorne House which was moved to the grounds in 1958 and became part of the national historic district on The National Register of Historic places. In addition to the two houses, the grounds contain an 18th century granite sea wall, two seaside Colonial Revival Gardens, an 1830 Counting House, and several other buildings. I wish I'd time to tour the grounds but I guess I'll just have to take another trip to Salem to do so! I did take lots of pictures from outside of the grounds including a shot across the water from the back of the Turner-Ingersoll mansion looking across Salem Harbor at the many boats moored there. I just wish there had been a little more color to the foliage! 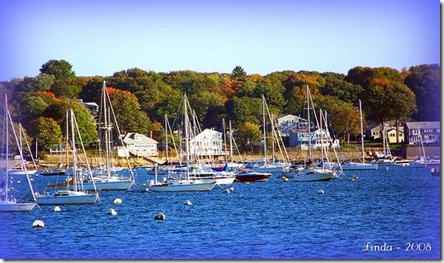 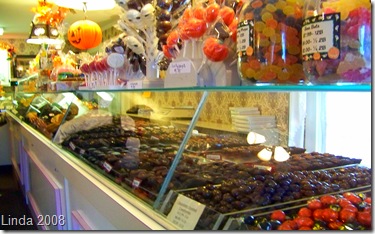 After taking way too many pictures, I headed back up Derby Street towards Salem Common and passed the country's oldest candy company - Ye Olde Pepper Companie. I just had to pop in and check it out and just walking through the door definitely took me back to an earlier time and place. I'm not sure if I was supposed to be taking pictures inside but I slipped my camera setting to museum mode and snapped what I hoped were a few unobtrusive photos. You can see more of them in the slideshow at the bottom of this post.

I behaved myself, didn't succumb to temptation, and walked out without buying any of the delectable looking treats to continue my walk back to where I was going to meet Amy, Darci, and Amanda. Along the way I passed a number of unique shops and little cafes/restaurants. None of them screamed "tourist!" and I was quite enchanted with the whole place while wishing I had more time to check things out. However, I was sure that the show was over at the Salem Witch Museum and it was time to rejoin the others and figure out our plans for the rest of the day and evening which definitely included one of the haunted tours that Salem is famous for! 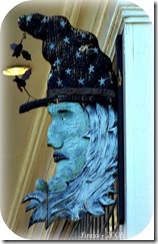 Prior to that, though, there were other little shops we wanted to look into and more pictures to take as it was only 4:30 in the afternoon and there was still lots of time before the sun went down and Salem really came to life! One priority stop for me was going to be the local CVS where I needed to scare up a new camera battery and something for the blisters that were beginning to develop on my left foot but after that I would be ready to go again. I really need to get a rechargeable battery and some better walking shoes!

I hope you enjoy the slideshow below and with any luck, I'll be able to post my final Salem post soon which contains lots of pictures from our Haunted Footsteps tour which was a lot of fun though creepy for some!