I haven't done a Manic Monday Meme in quite some time but how I could possibly resist this week's theme of "Moon"?!? I just couldn't, especially considering that I just finished reading Book 2 in the Twilight Series that I mentioned last week. New Moon is the follow-up to Twilight, the young adult fiction story that Amanda and her friends thought I should read before the movie version is released on November 21st.

The Twilight Series was written by Stephenie Meyer, born here in Connecticut yet raised mostly in Arizona, and Twilight was her first ever novel which has obviously achieved huge success and a major following of teenage fans plus at least one 50-year old as I am totally hooked! Having finished Twilight last week I had to wait for Darci to bring New Moon with her from New Jersey for me to read as I couldn't get my hands on it at my local library due to the overwhelming demand by other avid readers.

The four books in the Twilight Series tell the story of Bella, almost your typical American teenager, and Edward, your definitely not-so-typical teenage vampire - two souls who find themselves completely and totally intertwined with each other after they meet in the tiny town of Forks, Washington. As a complete and total sucker (no pun intended) for a good love story, I find myself really enjoying the books and am totally looking forward to the movie's release next month.

Having admitted to getting a bit annoyed with the character of Bella in Twilight, Amanda warned me that I was going to like her even less in New Moon but that turned out not to be the case at all. Not to give away the story to anyone who hasn't read them yet but does want to read the books, in the beginning of New Moon Edward leaves Bella for what he thinks is her own good as obviously being involved with a vampire has its down sides. Bella is understandably devastated and acts accordingly.

After finishing the book I asked Amanda why I was supposed to be more annoyed with Bella and she said that it was because of the way that Bella handled Edward's leaving. She thought that Bella overreacted but Bella's reaction was something that I could completely and totally understand having been there - done that - eventually survived that with a broken heart of my own that I thought would never heal. As I tried to explain to Amanda, until you've lost someone that you love more than life itself, you probably couldn't understand the hole in her heart and her life that Bella was obviously experiencing and that Amanda saw as an overreaction. Teenagers!

Unfortunately I could totally relate and perhaps that's why Bella had my whole understanding and sympathy and why the book had my almost undivided attention (well, in between phone calls and radio dispatches at work) and I was able to finish it on Saturday! Thankfully Cate brought books 3 & 4 - Eclipse and Breaking Dawn - with her this weekend so I am able to continue following the love story without interruption this time. Well ... expect for those darned phones and radio transmissions at work as well as needing to take time to sleep, eat, shower, and maybe blog a bit!

Even though the Twilight Series is categorized as Young Adult, I would really have to recommend it to anyone who loves a good romance with or without a supernatural twist. Oh, and if f you aren't into vampires there are some werewolves thrown in for good measure in New Moon. I'm quite curious to see what else shows up in Eclipse!

Finally, as a last touch for this Manic Monday Meme, I just had to post one picture of the moon taken during last month's Rhode Island beach vacation. Kinda looks like something a vampire might like, doesn't it?? 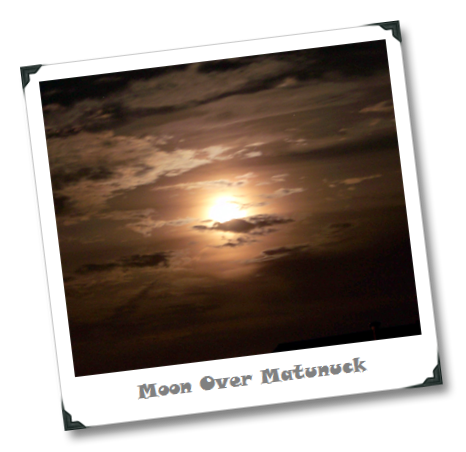 Be sure to pop on by the new home of Mo's Manic Monday Meme and check out the other entries for this week, too!
Posted by Linda at 10/13/2008