Anyone tired of looking at foliage yet? No? Good, neither am I! I took this picture on Monday while out running some errands and even though this post is about pie I figured it couldn't hurt to also throw in a lovely New England landscape just for good measure! This is the Montville side of the Thames River; I took it from Stoddard's Wharf on the Ledyard side of the river. Very pretty, isn't it?

So, as I mentioned, I was out running some errands one of which was a trip to the grocery store so that I could pick up a few of the ingredients I needed to try out a new recipe that I had come across for a Struesel-Topped Apple Custard Pie that sounded quite tasty. As you may have guessed from previous posts, I love a good apple pie and think I make a halfway decent one but occasionally I like to try something with a bit of a twist. 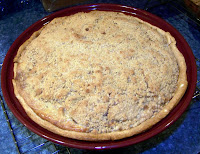 I found this recipe while looking for a pumpkin cheesecake recipe (which I might be trying out today if I get inspired) and it's not only easy but it's quite tasty, too! The hardest part was peeling, coring, and slicing all of the apples but if you've got one of those fancy-dancy gadgets that they make that almost does that for you then you're home free. If not, then you'll have to do what I did and do it the old-fashioned way! Other than that, the recipe is easy-peasy! 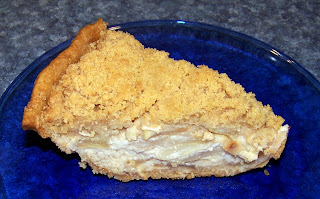 I didn't have any nuts in the house (other than myself and Amanda) so left that part out of the recipe but it didn't seem to affect it at all. Also, I used a lot more apples than four cups but that's because I used a 10-inch deep dish pie plate. Using the actual size called for may affect the custard a bit but I'm not positive.

Not having ever made this particular recipe before I wasn't too sure how it had eventually come out even though it smelled and looked good so I took the pie into work with me on Wednesday and used my co-workers as taste-testers. The verdict was that it was quite tasty and that I was free to "experiment" on them anytime so I'm going to chalk the recipe up as a success and may very well try it again sometime - perhaps using nuts and the 'right' size pie dish!

Of course being the good Mom that I am and not wanting to leave Amanda with no dessert of her own, I used some of the extra apples I had and made her an apple crisp using a slightly different recipe than I normally use but it seemed to come out quite good, too. 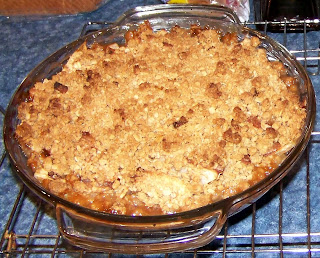 She must have liked it as I found the very empty dish in the sink this morning and never heard a single complaint! Either that or it was horrible and she didn't want to hurt my feelings!

Let me know if you try this recipe out, I'd like to hear how other people liked it. In the meantime, I'm going to look at some more pretty foliage. Have a great Saturday wherever you may be!