When Amanda first asked me about going up to Salem last week while Darci was here visiting I was a little hesitant and then decided "sure, why not?" as it's not all that far from here and there were a lot of things up there I wanted to see. The idea of staying late enough to go on one of their famous ghost tours came later but I certainly wasn't adverse to the idea. It was Salem after all and it was October to boot so why not? I'd just be driving home late but I didn't need to be up in the morning so I figured that was okay - it would be worth it!

Initially we were going to take the Terror Trail Tour which is a 75-minute candlelight tour but then while at The Broom Closet buying a crystal and other things for Cate, Amy got to talking to Tara, the clerk in the shop, and Tara told her about the Haunted Footsteps Tour that she was a guide for and that's rated one of the best in Salem. Tara assured us that we would really enjoy the tour and that they encouraged people to take photographs unlike some of the other tours so we jumped ship on The Terror Trail and signed up for Haunted Footsteps instead.

Salem is a fascinating place by the light of day but once the sun goes down and the moon rises, it becomes even more of a fascinating place and it seems to become that way to a lot of people! I was rather amazed at the number of other tour groups that we crossed paths with that night but I guess there's money to be made off of people wanting to scare themselves with tales of murder, mayhem, and the supernatural. We humans are an odd lot!

Armed with fresh batteries and an extra pair of socks, I joined Amy, Amanda, and Darci along with 76 other people at the designated meeting spot where we divided into two groups of 40. We managed to be in Tara's group and before we knew it we were practically flying down the road after her. Nothing for nothing but shortly into the tour I was quite positive that Tara had been Jesse Owens in another life! I gave up trying to keep up in the hopes of not getting major league blisters and just caught up instead!

Our first stop was at the former home of one of Salem's many sea captains who was murdered by a hired thug whom several of his cousins employed. Apparently all was well in the house until Salem purchased and moved a historic home that had previously been down the street a little bit that turned out to be the home of the murderer (who had been hung in Boston for his crime). After that strange things started happening and the house officially became haunted. I got a picture of one small orb near the front door of the house but nothing spectacular.

Moving on, our next stop was outside of The Witch House, the only surviving house in Salem that was connected to the witch trials themselves. As we stood outside the gate and listened to Tara talk of the paranormal activity that occurred there, you just got the feeling that what she was talking about was probably highly likely as the place just felt creepy. A picture here captured a rather large orb over the yard that could easily be mistaken for the moon - but wasn't! 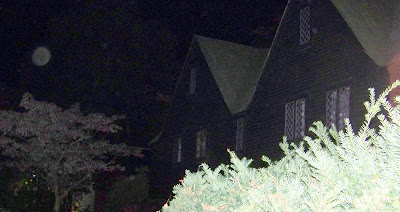 While at the same house, Tara told us the story of a little girl who had died at the Parker Brothers factory during the Great Salem Fire of 1914. The factory had been located just down the road from where we were standing and to this day the little girl has been said to come up to younger women on the tour and try to take their hands as she continues to look for her mother. A little while later Darci swore up and down that someone had rubbed their hand up and down her arm while she was listening to Tara and she was officially freaked out but she handled it well.

Our next stop was outside of the Howard Street Cemetery, the site of Giles Corey's death in 1692. Giles Corey was the only victim of the Salem Witch Trials to die from torture rather than hanging as he refused to state his innocence or guilt of witchcraft knowing that to enter a plea would be to lose all of his property and leave nothing for his family. The law allowed for the torturing of a prisoner to extract a plea by a method called Peine forte et dure -or crushing - and that's exactly what Sheriff Jonathan Corwin set out to do.

He led Giles to an open pit in the middle of the field, stripped him of all of his clothing, and then laid him down in the pit, placed boards on his chest, and then placed heavy stones on the boards. Over the next two days, Giles was asked repeatedly to plead innocent or guilty to witchcraft but each time he replied "more weight." Finally at noon on September 19th, 1692 the sheriff asked Giles one more time for his plea and legend has it that Giles Corey replied with a curse on Corwin and Salem before he took a last gasp and died from the crushing weight. Further legend has it that the spirit of Giles Corey appears in the Howard Street Cemetery before any great calamity befalls the city of Salem, including the Great Fire of 1914, and visitors to the cemetery will often feel a cold hand on their shoulder. Thankfully I only got pictures of orbs and no ghostly apparitions at the Howard Street Cemetery! 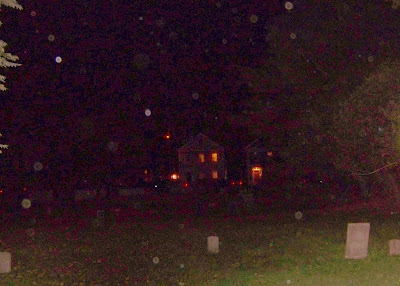 For the next part of our tour we merely walked across the small parking lot to the Old Salem Jail which was built in 1813 and was the oldest operating jail in the United States until it closed in 1991. It has a rich history of hauntings which doesn't surprise me as it's right next to the most haunted cemetery in town. Amy and I took pictures while the girls listened to scary stories of prisoners who continue to scream and howl though they're long gone and ghostly apparitions that appear in the windows and scare the bee-jeebers out of the elderly residents who live in the retirement condos across the street!

Honestly, though, I'm sure that place would look extremely creepy even in the full light of day! The city has plans to either demolish it or convert it but I'm not so sure I'd want anything to do with any part of the property at all were I them! I took the below picture after everyone else had started to walk off to our next destination and I lingered behind for a bit. Good thing I saw it later or I would have been running ahead of everyone else! 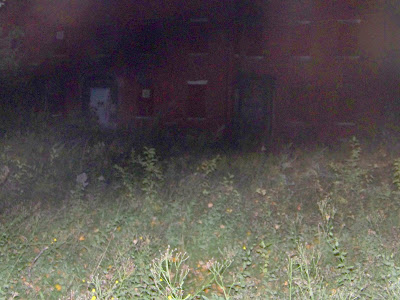 A slightly longer walk took us next to the back of The Lyceum Restaurant which was built on the location formerly occupied by the home of Bridgette Bishop, one of the most famous witches to be hanged during the Salem witch trials. Rumor has it Bridgette haunts the place but I'm sure the diners inside thought that tour groups standing outside were more of a nuisance than ghosts inside, however I guess in Salem you get used to that sort of thing!

From there we continued on to the former Daniel Lowe & Co., another reportedly haunted building but I missed most of the story on this one as my foot was really beginning to throb from the definite blister I had developed trying to keep up with Tara! All I know for sure is that Daniel Lowe was a jeweler who launched the entire souvenir spoon movement back in the 1890's when he designed the "Salem Witch Spoon". Beyond that I am totally clueless about what goes on at the building except that the bottom half of the floor is a restaurant and bar that I'm sure has "spirits" galore!

Next stop on our Haunted Footsteps Tour was The Joshua Ward House, the 4th most haunted house in America according to A&E and Tara. I didn't really notice anything too strange there though Amy tells me she got some interesting pictures. I didn't think I had captured anything out of the ordinary other than a couple orbs over the house in the back until I got home and took a closer look at a picture I took of the front of the house ... 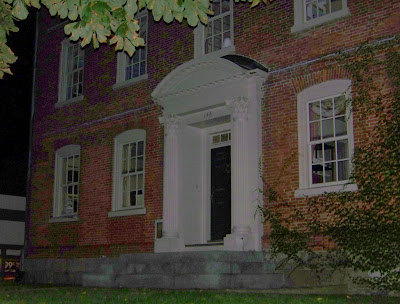 I have no idea what that is in the window above the doorway and looking at it enlarged doesn't help so I'm just going to leave it up to my imagination and yours! I'm just glad we were outside of the house and not going in after some of the tales Tara told there.

Our final stop was the Witch Memorial that I've written about before right outside of The Burying Point, the oldest burying ground in the city of Salem. I took a lot of pictures of the cemetery while Tara wrapped up her stories for the night - some there are orbs and some there aren't but that seems to be the way it is in every cemetery - or at least the ones I've been in!

All in all it was a good tour and Tara did a great job of narrating it though it would have been nice had she slowed her pace just a tiny bit! With the colossal blister that had developed on the ball of my left foot, I could barely walk by the time we finally got to the car and headed back towards Norwich at the very late hour of 10:00! Still, the girls had a wonderful time as did Amy and I. It was both educational and fascinating; now we want to go up to Danvers, formerly known as Salem Village, and home to even more witchcraft lore and spooky places to check out. Perhaps there's another road trip in store not too far off? One can only hope!