So ... while I was working my nether regions off this past weekend, Amanda was out doing one of the things she loves best - attending a couple of Mindless Self Indulgence concerts in the area. As part of their continued IF tour, they were playing in both Providence and New Haven this past weekend and with the band that close of course she had to go!!

Because I'm a pushover, I got her the tickets as part of her Christmas present but I told her that there was no way that I was going this time as I had to work, there was a snowball's chance in a warm climate that I would be able to get the time off, and -frankly - I figured she'd have a better time without her mother tagging along even though I have been deemed to be "epic", "awesome", and "amazing" (just to name a few adjectives) on the MSI forum that Amanda frequents. Apparently the child speaks well of me to her friends!

Anyhow, my greatness aside (!) ... there were two bands opening for MSI at these shows ... Leathermouth featuring Frank Iero of My Chemical Romance fame and Tub Ring who hail from Chicago. 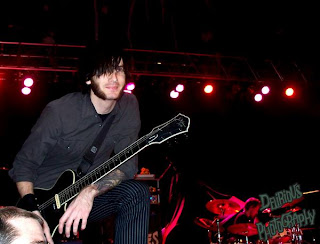 Amanda was more excited to see Tub Ring perform as she had heard that Curtis RX, a member of the band Creature Feature (whom I did a post on awhile back) was going to be playing guitar with the band as a guest. Excitement abounded!

Bright and early on the morning of the first concert in Providence, Amanda and Robert took up a place in line outside of Lupo's Heartbreak Hotel and even though they were there at 7:00 a.m. for a 7:00 p.m. show, there were already four people ahead of them in line. Amanda sent me a text that they were "MCR fan-girls" and were apparently there to see Frankie while not giving two hoots about MSI or the other band. Throughout the day Amanda kept in touch with me via text to let me know that she hadn't frozen yet, that she and Robert were taking turns popping into the nearby Dunkin Donuts shop to warm up, and that Steve Righ? of MSI fame had walked by and talked to her a little bit.

Finally it was time for the concert to start and Tub Ring took to the stage first followed by Leathermouth, whom Amanda didn't really care for, and then her favorite - Mindless Self Indulgence. Naturally Amanda and Robert stayed after the concert to chat with the band members (MSI is really good about that sort of thing) and Amanda had a chance to talk with Curtis RX; she told him that it was nice to see him on the East Coast and asked when the new album was coming out. Artist that she is, she also mentioned to him that she was trying to draw a comic based on one of Creature Feature's songs and he thought that was great and for her to send it off to him at MySpace when it was done.

The next concert was being held at Toad's Place in New Haven on the Yale campus and Amanda and Robert met up with some of the other members of the Nation of Crackers, the MSI forum to which she belongs and who think I am all that and a bag of chips (for reasons that I won't go into here). For this concert they didn't get into line until 11:00 and there were only about six or seven fans in front of them. As a note here, it's important to point out that one has to get to a concert ridiculously early if one hopes to be really close to the barrier and/or stage as what's the point of going if you can't be potentially crushed in the front of the crowd?! 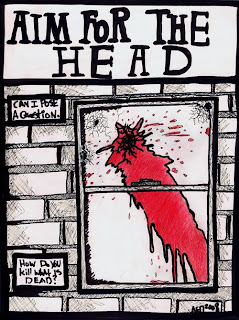 When Tub Ring took to the stage to open the night this time, Amanda and Robert were right in front of Curtis' side of the stage and about 15 minutes in, Curtis spoke to Amanda from the stage and said, "Hi, I already broke a string!" At the end of their set Amanda yelled out "I have part of the comic finished" and he told her to meet him at the merch ('merchandise' for those not familiar with the lingo) stand in five minutes.

Of course she did and they had a chance to talk about comics and future concerts and Amanda getting a job so that she could pay for their next CD and concert tickets on her own (yay!). I guess they even talked about the weather when Curtis told her that he wasn't used to the cold being that he was from California so she told him that she was a Californian herself (born in Long Beach). Apparently they had a nice chat and she sent me a text all excited that she had made a new friend.

Being that she was so close to the front of the stage, Amanda had the chance to take some pretty good pictures so she asked if I would put them together in a slideshow for her and post it on my blog. After all, she reminded me, this blog is supposed to be about her, too, and this is exciting stuff for a 16-year old so how could I not write about it?!? Well, when she put it that way, I guess that I couldn't so without further ado may I present to you Tub Ring (whose music isn't too bad!) featuring Curtis RX of Creature Feature! -


Maybe the kid could have a future in concert photography if the whole art thing doesn't work out?!? Considering the video doesn't show Amanda's pictures off to their best, if you'd like to check out the pictures in a "better" setting then be sure to go check out Delirious Photography - Amanda's photo-page on MySpace!
Posted by Linda at 12/09/2008