The Best Laid Plans of Mice and Men are Sometimes Snowed Away ...

Well, okay, so that's not the way the quote goes but that's the way that today went what with all of that cold white stuff coming down from the sky and coating the roads. Tonight was the party that I mentioned earlier this week - the one that we have around Christmastime so that those of us who work in the stress-filled environment of dispatch can kick back and relax a little ... that one. Yeah, well, it's going on without me while I get to sit here and try not to feel too sorry for myself and failing miserably if I have to be honest.

I don't exactly live in the best place when it comes to snow-covered roads - the top of two hills can be tricky - but even if I could have gotten down off "the mountain" as my Dad used to call it, I'm not a big fan of driving in snow either. When the Governor and the State Police Spokesman say to stay off the roads, I'm one of those people who stays off the roads if I possibly can because I figure they know what they're talking about and there are enough other arrogant drivers out there who think they know better that don't stay home and end up keeping the state and local police busy as well as those great men and women whom I dispatch for a living.

As a matter of fact, while I was watching the news tonight one of the reporters was talking about one of the bigger malls up near Hartford staying open late tonight so that last-minute shoppers could get those much-needed gifts. This story came right after the one where they spoke to Governor Rell on the phone and she appealed to everyone to stay home and off the roads! Nothing for nothing but as far as I'm concerned if getting that much-needed gift could possibly result in an accident where I bang up my car at best or hurt myself or someone else at worst then it can be a late last-minute gift. I mean, come on people - it's December 19th - there is still plenty of time to go out and buy gifts if you feel so inspired.

Add on the fact that the retailers who are opting to not only stay open but stay open late are risking injury to their employees and it just makes me think that people are morons sometimes. It's more important to make a buck then let someone be safely at home while the roads turn into potential minefields. Again, nothing for nothing, folks, but a cashier at WalMart is not supposed to be considered essential personnel. I'd like to think that title is reserved for police officers, firefighters, and emergency medical personnel as well as those of us who have foolishly signed up to answer the 911 lines that send those brave souls out into inclement weather to render aid.

Ah well, what do I know? I'm sitting home missing a really good time and really good food with a voice that makes Kermit the Frog sound like silk (if I had gone to the party, lively conversation would have been totally out of the question!) and I'm probably just being a bit of a grumble bunny. At least it looks nice outside ... 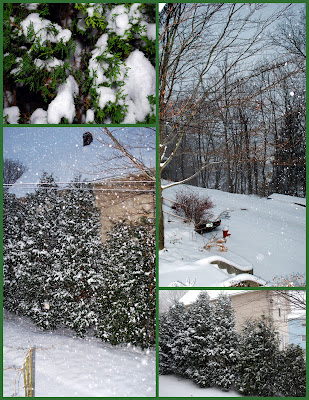 Oh, and I figured that if I couldn't get to the party, I'd at least make a cake for the girls and I that we could have here at home ... festive, ain't it? 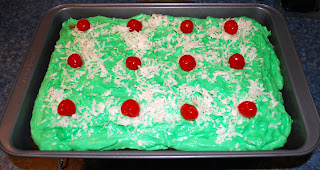