If it seems like I've been writing an awful lot of Line of Duty Death posts it's because I have been. As of this writing, there have been 122 brave men and women who have lost their lives in service to their communities with 56 of them involving some sort of motor vehicle whether it be an accident or assault just like the two officers in this post. 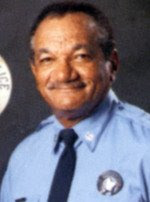 An early morning crash on Interstate 10 in New Orleans, Louisiana claimed the life of New Orleans Police Department Reserve Officer Curtis Jones. At approximately 12:00 a.m. on Saturday, November 29th, as he was returning from duty at the Superdome, Officer Jones' patrol car left the roadway, traveled about 150 feet across the grass, and struck a tree. Officer Jones, 74, was treated at Northshore Hospital, but died from injuries he received in the crash.

An army veteran who joined when he was 18 and served for 25 years, including action in Vietnam, Officer Jones put down roots in New Orleans and started a new career in primary school education upon his retirement from the Army. He began his teaching career at Helen S. Edwards Elementary School then went on to become an assistant principal at Bienville Elementary School and principal of Our Lady Star of the Sea Catholic School, both in New Orleans.

Jones began a third career as a police officer around 1990, serving in the NOPD's 6th District where he served as a Reserve Officer until the time of his death. He did it because "that's what he loved doing: giving his time, no matter what," said his wife of 21 years, Brenda. "If someone asked him to do something, he would never turn away," she said. "There was a lady on the street . . . she lived under the highway. He would buy her food, check on her. He loved it, helping people."

In addition to his wife, Officer Jones is survived by two children from a previous marriage.

A San Antonio, Texas police officer who was injured in the line of duty on Friday, November 28th, succumbed to his wounds on Monday, December 1st, after his family disconnected his life support equipment.

Police Officer Robert Davis was injured while clearing roadway flares at the scene of a traffic accident around 7:30 p.m. Friday night when another San Antonio Police Officer, who was driving his patrol car to a shoplifting call, struck another car causing it to spin out of control. The officer's car veered to the right and struck Officer Davis who was pinned beneath his colleague's patrol car. Both officers were transported to the hospital with multiple injuries as was the civilian whose car was struck.

The accident was made especially tragic as the relatively new officers, who graduated from the police academy almost exactly one year ago, are close friends who would do anything to ensure each other's safety. "On any given day, they would have sacrificed themselves for each other," said Mike Helle, president of the San Antonio Police Officers Association.

Officer Davis, age 26, is survived by his wife and a department that is stunned by the incident.
Posted by Linda at 12/02/2008