While her sister and I are sitting home in the frigid northeast and watching the temperatures dip into the negative numbers, Amanda is enjoying the above which she sent via text picture. Gee, I don't see a single speck of snow in that picture, do you? She flew out of Philadelphia very early this morning with Darci's family and landed in Puerto Rico sometime before noon. Lord knows if she's out walking the sandy beaches now or what but I can tell you that the view here in Connecticut is much, much different! 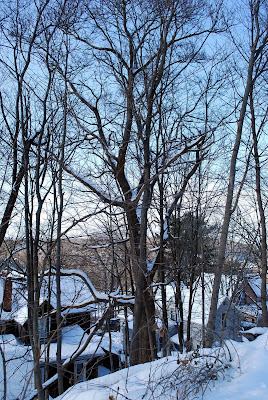 After a very dismal weekend, the sun came out this morning but didn't really get the chance to warm things up too much and we had temperature readings in the teens on the thermometer - though the windchill factor was much, much lower. Nothing really melted at all but the roads were finally starting to clear and driving wasn't anywhere near the ordeal that it has been since Friday.

Good thing, too, as I had decided that one of Jamie's Christmas presents was going to be a trip to get her eyes examined so that she could then pick out a couple pair of glasses from ZenniOptical.com (a great online site for really cheap but good glasses! This isn't a paid post, I honestly got Amanda's last two pair of glasses from there and paid less than $40 for both pair!).

Jamie hadn't had her eyes checked since 7th grade due to the fact that her Dad has no insurance for her and couldn't afford to take her to an eye doctor. I figured she was way past due for a new pair of specs so scheduled an appointment at Cohen's at the local mall as I had found a coupon for half-off of the exam - woohoo! 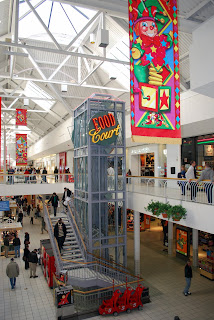 I had obviously forgotten that there would probably be a ton of people at the mall what with it being just days before Christmas and the weather keeping most sensible people home over the weekend but in spite of the traffic and crowds, we managed to get a decent parking space and got to Jamie's appointment with plenty of time to spare. It didn't take long for the exam to reveal that her vision had changed as suspected and soon we walked out with the new prescription in hand.

As anyone who reads my blog regularly knows, I am not a great fan of shopping and/or the mall but teenage girls love 'em so Jamie was quite happy to find herself in one with hordes of holiday shoppers. I acquiesced to looking through a few of the stores after her eye exam even though I really just wanted to cut and run from the place! Still, there was at least one present I wanted to see about getting so we popped into the Hot Topic store, a place that both girls love and that gives my cousin Amy a headache! 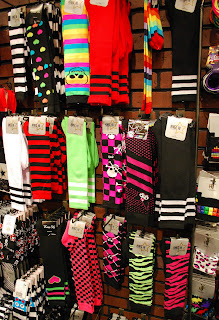 I was looking for a pair of socks to go with the other part of the Christmas gift I had gotten for Amanda's friend Cate and what better place to look than at Hot Topic - store of multicolored socks galore! As I tried to decide on which pair I wanted to get for Cate, Jamie proclaimed that she really needed a pair of striped socks herself and chose the third pair over from the left at the top of the picture. Amanda already owns the fifth pair over and she didn't want to have the same socks as her sister. They are cool socks but the cost for a pair of socks has gotten to be ridiculous! After you hand over the arm and leg that they cost, you're really only going to need one sock and not a pair if you're going to be the one wearing them!

After a few quick pictures ... 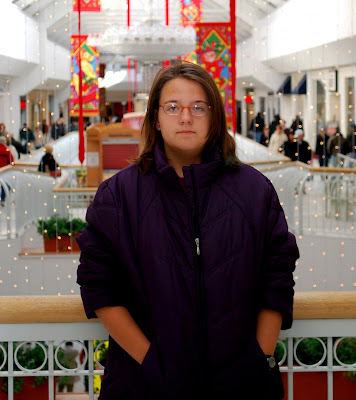 ... ah come on, kiddo, smile a bit! ... we left the mall and the traffic behind and made a few other quick stops before arriving back home to throw some ice melting stuff on the front steps and pick out a couple pair of glasses on the computer. Hopefully they'll arrive before Jamie heads back to Florida on the 5th. 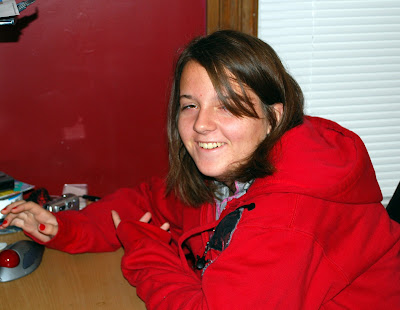 What I'd like to do now is take a nap but alas, I guess I need to wrap what few Christmas presents I have as I don't think that Santa's elves are going to sneak in and do them for me. Darn! Ah well ... where did I put those bows??
Posted by Linda at 12/22/2008