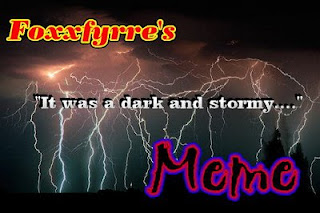 Even though I had close to two weeks to work on this ... I didn't. Ah, procrastination thou art a good friend of mine! Maybe, though, my thinking was that I would work better under pressure (hmm, isn't that a David Bowie song??) and waiting until the day before would require my muse to put in a little extra effort and not be such a slacker. That was the plan at any rate! So, let's see how I did, shall we?

First, I should tell you what this meme is all about and post the rules should anyone else choose to play. From Frank's keyboard to your eyes this is how it goes:

You have just finished writing the greatest novel ever written. It is getting rave reviews. War and Peace is mere pulp fiction when compared to your novel. Nobel Officials created a new category to award your work for they felt it would far overshadow previous works awarded for fiction if yours was awarded in the same category. Accolades and reviews for your novel pour in along with one unanimous criticism -- your novel has the worst opening sentence in an equally atrocious first paragraph, ever.

1. Choose two genres from the ones listed below in #4
2. Come up with a suitable title for a different novel for each of your genre choices.
3. Write a different opening 'atrocious' paragraph of your 'highly praised novel' in context to each genre you chose, paying particular attention to the "Dark and stormy" quality of your first sentence of your paragraph. Don't just rewrite the "Dark and stormy" sentence for your paragraph. Come up with something new and fresh, but 'atrocious' too. The sentence and paragraph should follow good English grammar rules. Don't just write a grammatical mess of a sentence. Remember, you are a Nobel Prize worthy author.
4. Choose two of the following genres for each of your "Prized Novels": Western, Science Fiction, Romance, Historical Fiction, Modern Contemporary Fiction, Mystery, Comedy, Horror.
5. Post the meme description and rules.
6. Post your first genre choice, title and paragraph, followed by your second genre choice, title and paragraph.
7. Prepare yourself for accolades of laughter and ridicule for your "Highly Praised Novels" atrocious openings.
8. Contact the Nobel Prize officials for you may just continue and write that award winning novel.
9. Tag people, lottsa people.

Bad writing shouldn't be all that difficult for me to accomplish as I've had years and years of practice starting when I managed to win a writing contest in 7th-grade with a story that I was sure had to be one of the worst ever in the history of the Dr. Helen Baldwin School of Canterbury. I think I only won because I had the nerve to not only write about but submit a story about a boy and his beloved dog while using, as the main character, the guy I had a hideous crush on for two years. I'm sure I only won so that the story could be published in the school newspaper and cause acute embarrassment not only to myself but to the guy I wrote it about because if I remember correctly, the story itself wasn't very good at all!

Anyway, I digress and this post wasn't supposed to be a painful walk down memory lane but an attempt at some good bad writing! As my two genres for this meme I have chosen Western and Romance and I hope that I have done justice to the meme. When I'm done here I shall go work on my acceptance speech for my Nobel prize. I'm thinking I'm going to need a new outfit for the awards ceremony, too ...

"It was a pitch-black night on the desert mesa brightened only by the occasional jagged bolt of lightning which was accompanied by an unrelenting curtain of water and wind that howled louder than the wolves that slunk their fur-soaked bodies back into their rocky caves as the prairie dogs took refuge in their dark underground homes (as prairie dogs are wont to do) while the cacti merely stood stiffly, like large needle-covered silent sentries, weathering the storm in sullen succulent silence as their prickly bodies were rooted firmly to the ground and they were unable to escape the fury of the storm that lashed the desert landscape with its wind-blown anger."

"The sky outside was as black as ink and as unsettled as a creaky wooden vessel upon a storm-tossed sea while Vanessa stood at the window of her opulent and, despite all of its grandeur, empty bedroom; a solitary and forlorn figure who wrapped her arms around her not-ungenerous breasts as she looked out upon a magnificently rain-tossed landscape that no longer held any appeal for her since the love of her life, the dark-haired gallant and dashing Jerome, had ridden off on his magnificent specimen of a stallion leaving her bereft in her heart and aching from unfulfilled needs in other parts of her lush woman's body; unfulfilled needs that threatened to bring her to her knees in their unrelenting desire to be quenched and sated by a man who no longer held her tenderly in his arms due to a misplaced allegiance to the man whose seed had fathered him and then chosen to abandon him when he was just a mere boy."

And there you have it, my attempt at literary greatness! I hope that I have made my favorite soon-to-be-best-selling author and blog buddy Gale proud. Let me just say that even though I stink on ice when it comes to this stuff that she is writing one heck of a fantastic novel. Go Gale Go!!! Go Gale Go!!!

If you'd like to try your hand at this particular meme go for it and do let me know; it really was a lot of fun doing this despite the procrastination!
Posted by Linda at 9/24/2007