My Romantic Self Indulgence

********************
Amanda's chant for yesterday was "this is a good day! this is a good day!" and anyone who read yesterday's post about her plushie doll JimJamZ making his stage debut can figure out one reason why (and what kid wouldn't be thrilled that the doll she made was "performing" on stage with one of her favorite bands?) There was another reason, though, to which I was sworn to secrecy but since it has hit the Internet full-force, I think I can write about it now.

In addition to the excited phone call I got from Amanda at work yesterday, I also received a call from Amy, the person who was responsible for Amanda and I having such a fantastic time at Projekt Revolution. For those who might not remember, Amy is the sister of LynZ who is the extremely flexible bassist for Mindless Self Indulgence, the band that the aforementioned JimJamZ was sharing the stage with. In this picture JimJamZ hangs back while LynZ performs. For more photos, check out my post JimJamZ Goes on Tour With Mindless Self Indulgence. 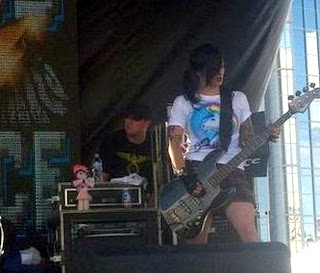 Anyhow ... to try to make a long story short, it had been rumored on most of the My Chemical Romance message boards and elsewhere on the internet that LynZ was dating Gerard Way, lead singer of MCR. Someone had posted a single picture and speculation was running rampant amongst MCR fans as to just what was going on. Due to having an inside track, Amanda and I knew the truth of the matter but we were keeping it quiet out of respect for both Gerard and LynZ, who we met backstage at Projekt Revolution. In my post about the concert I wanted to write about what a happy couple they were but I didn't think it was my place to go public with their relationship. I figured when they were ready to announce it to the world, they would.
Which brings me back to Amy's phone call yesterday ... she told me that LynZ had called her earlier that morning to tell her that she and Gerard had gotten married but she swore me to secrecy, with the exception of Amanda, as she wasn't sure if LynZ had gotten the chance to talk to their mother yet and she sure didn't want her mom hearing it on Entertainment Tonight or some such thing. Not that I was likely to call my good friend Matt Lauer at The Today Show and fill him in as Matt usually has his cell phone off in the afternoons but still ... it was exciting news that I couldn't wait to get home and share with Amanda. 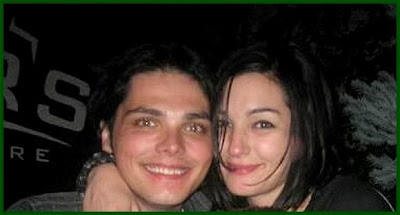 The Happy Couple
Of course when I got home Amanda was all excited about seeing JimJamZ on stage with Jimmy so I was thinking that the news of Gerard and LynZ might not sink in right away through the excitement of "I made that doll!" When she finished telling me all about the messages and pictures I said, "I talked to Amy today" and Amanda immediately stopped and said "It's bad news, right?" "No, but it's about Gerard and LynZ - they got married." Dead silence ... "Uhm, Amanda? Amanda? You going to breath anytime soon?" I was beginning to think I was going to have to call 911 for one of my own ambulances when she finally broke out into a big delighted smile and happy squee. "This is a good day!"

For those of you who might have popped by via a Google search let me just say that yes, Gerard and LynZ are honestly and truly married. They had a short ceremony after the very last show on the Projekt Revolution tour at the Coors Amphitheater in Englewood, Colorado on Monday. It was performed backstage by an ordained minister who is also a staff member of Live Nation, the concert promoter, and was attended by members of all the other bands. The bride wore a black and white baseball jersey while the groom wore a jean jacket over a t-shirt sporting a colorful unicorn and the name "Lyn-Z" (see picture above of LynZ wearing the same shirt).

In my overly romantic and true-love-conquers-all opinion, I think it is just the sweetest thing ever and I wish them many, many years of happiness together. As a matter of fact, I'd like to see them be as happy as Amy and Jason (Gerard's new in-laws) whom I believe to be one of the most fantastic couples I know! Of course, Gerard has a long, long ways to go to be even close to the son-in-law that I'm sure Jason is - rock star or not! Having such fantastic daughters as she does, I'm sure LynZ's mom is not impressed easily!

As for those who keep wanting to post stupid comments on the message boards about how Gerard has changed, this was too soon, and this is the end for the band as well as all the other crap that I've seen, all I can say is STOP IT! When two people find love it's a good thing and there have been lots of band members who married members of other bands that have proved it's not the end for either band. If you're a true My Chem fan then you're going to stop crying over someone that chances are real good you never could have had anyway, you're going to wish Gerard and LynZ much happiness, and then you're going to find something else to talk about. I mean come on, just because Gerard and Mikey got married doesn't mean it's the end of My Chemical Romance or their music. Besides, look on the bright side - Bob Bryar might still be single!

Gerard and LynZ - if you ever read this (which I doubt) many congratulations; Jason and Amy (and I know you do you read this!) when are we getting together for Guitar Hero???
Posted by Linda at 9/05/2007