Starting My Day Off With a Bang!

********************
Yay! It's my day off! You'll notice I said "day" off as in singular and not "days" off as in plural. Unfortunately, due to my having to call out sick the other day, I really needed to pick up an extra day this week to make up for the loss in revenue (and points) so I'm fortunate that another dispatcher is on vacation this week and I'm covering for his day shift tomorrow.

I don't mind working on Saturdays all that much as the pace usually isn't as bad as during the week and with less people in the room - heck, in the whole building! - things are a bit more relaxed. The downside is that with fewer people on the road, when it hits the fan, it really really hits the fan! Oh well, such is the nature of the beast!

Old person that I am becoming, one of the best things about a day off, in my opinion, is that I get to sleep in a little and am not a slave to the blasted alarm clock. Every morning when I wake up my first thought other than "groan, is it time to get up already?" is "how many more days until I can sleep in?". Today was a sleep in day.

Or, it should have been if I hadn't had my bedroom window open. My bedroom is in the front of the house which obviously faces the street and directly across from my house two of my neighbors park their boats. The neighbors are both nice enough guys and quite friendly once I got rid of my ex-husband who had a nasty habit of getting on the neighbors' wrong sides - imagine that! - but being avid fishermen that means they like to get up early and go out to catch 'em while they're still biting. Sometimes this means getting their boats ready to go way too early in the morning and sometimes that involves a little bit of noise.

So, as I'm slumbering blissfully away this morning having the strangest dream about being asked by Gerard Way to help him design his new house (what the heck did I have to eat before I went to bed last night??), I am suddenly jarred awake by a loud clanging noise directly outside my bedroom window. God's nightshirt, what in the blue hell was that?? I immediately jump out of bed and look out the window where I see my neighbor has removed some unwieldy object from his van rack and unceremoniously dropped it on the pavement next to his boat. Well, thank God that's all it was as it had almost sounded like the entire Union Army had marched up the road and set up "The Dictator" directly across from my house! 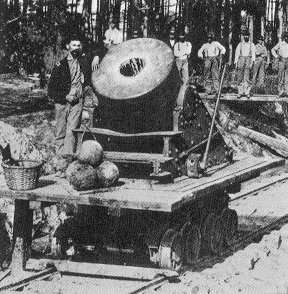 Just as a bit of history for those not familiar with this particular piece of Civil War artillery, this 13-inch seacoast mortar weighed over 17,000 pounds and was intended for siege and fortifications and not field work. This particular monster, forged at the Fort Pitt Foundry in Pittsburgh, Pennsylvania in 1862, was made portable during the Siege of Petersburg, Virginia by being mounted on a railroad car which was specially strengthened with extra beams and iron rods to withstand the strain of firing. Since this mortar threw a 218 pound shell about two and one-half miles with a charge of 20 pounds of powder, the strain was obviously considerable.

Needless to say, if it had arrived across the street from my house, it would have involved considerable noise and fanfare! Of course my neighbors aren't that noisy and, yes, I am way exaggerating but at the time, that's almost what it sounded like! And it certainly ended my dream and sleeping-in time.

Oh well, time to quit fooling around and get on with the day. The sad thing is, now I'll never know whether I got to redesign Gerard's house or not! How did your day start out??
Posted by Linda at 9/21/2007