Creeping Up to Maine

*********************
Despite my irrational fear of Maine based on having read way too many Stephen King stories over the years, I have decided to conquer them and will be heading north at the end of the month for yet another dose of My Chemical Romance when they play at the University of Maine's Alfond Arena.

For those of you who read my previous post where I was debating whether or not we were going to go, I can see you nodding your heads and thinking to yourselves "yep, I knew she was going to go as soon as she mentioned it!". Yeah, yeah, pat yourselves on the back - you were right! Of course, it probably wasn't all that hard to guess which way I was going to go on this, was it?

To be honest, part of the attraction of going is my irrational fear of Maine because, as it turns out, the University of Maine is not very far at all from Bangor, where Mr. King resides, and if I'm ever going to conquer my fear of the land of Cujo, Christine, Pennywise*, Richard Straker**, and Gage Creed*** then I apparently need to head directly into the wolves' den and face it head on. I'm pretty sure that's what one of the reluctant heroes of King's books would do. Shiver ...

The current plan is that myself, Amanda, Amy, and Cate will head up the morning of the 27th allowing ourselves enough time to drive the 5-1/2 hours north and arrive in the Bangor area right about the time of check-in at our reserved hotel which lies a mere 6 miles from my favorite author's home and an even closer four miles to the Paul Bunyan statute which towers a mighty 31-feet over the landscape in Bangor's Bass Park. Pretty impressive, eh? I see photo-ops galore for future blog posts! 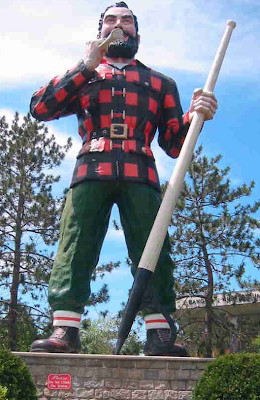 The concert kicks off at 8:00 p.m. but I'm sure we're going to have to be there early as it's general admission seating and unless we want to sit in the rafters, we're probably going to have to line up with all the other bands' fans. Again - I see more photo ops! I'm pretty sure that Amanda and Cate will play the role of excited 15-year olds while Amy and I attempt to adopt some form of nonchalant masks of maturity. Most likely I will be humming the tune of MCR's last single "Teenagers" while the lyrics "Teenagers scare the living &$%* out of me" plays on a constant loop through my head! Oh yes, this should be great fun!

After the concert we'll retire to our hotel where the girls will continue to squee and relive every move of every band member. Once they've exhausted themselves, I will attempt to sleep with one eye open to insure that none of the ghosts and ghouls of Maine decide to stop by and attempt room service! Instead of counting sheep I'll just keep repeating "He thrusts his fists at the posts and still insists he sees the ghost" over and over until I fall into an exhausted sleep filled with balloons and toy boats that bounce along to the maniacal laughter of ... 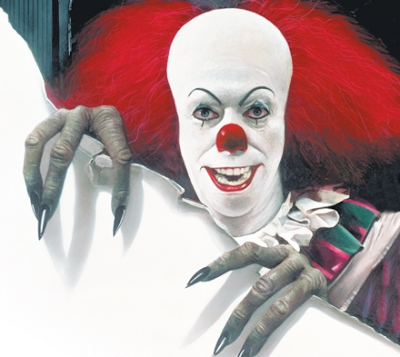 Oh yeah - this should be fun!! Stay tuned for future posts!