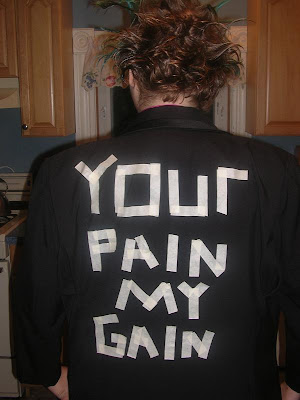 I was away from the blog all day on Saturday as Amanda's friend Cate had stayed over this weekend and we spent a good chunk of Saturday out gathering things for Halloween costumes. Despite the fact that it's still a couple weeks away, one should never ever wait until the last minute to get one's costume put together or else one ends up being something or someone he or she didn't really want to be.
Amanda wanted to dress up as Jimmy, the lead singer from Mindless Self Indulgence; while Cate decided she'd like to go as Gerard Way, lead singer of My Chemical Romance - preferably from the "Revenge era" and as he appeared in the Helena music video in particular. 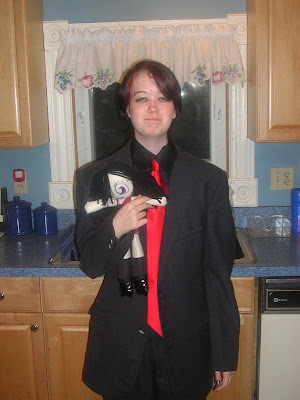 A stop at the local Goodwill store found a great bargain on a dark suit for "Gerard" as well as most of the needed items for "Jimmy" and then it was off to Wal-Mart for the finishing touches for both of them. Once we got home, the girls just had to put their costumes together and then insisted on wearing them over to Jason & Amy's for Amy's birthday get-together. 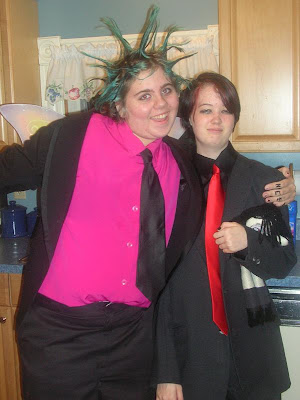 Lesser parents might have said, "okay, that's it - there will be NO more sleepovers if this is the end result!" but Jason & Amy both took it in stride and rather enjoyed the company of the two "rock stars" for the evening. "Gerard" and "Jimmy" spent some time playing Guitar Hero II and also with the new Wii that Jason got Amy for her birthday. In this picture they're in the middle of an intense game of bowling: 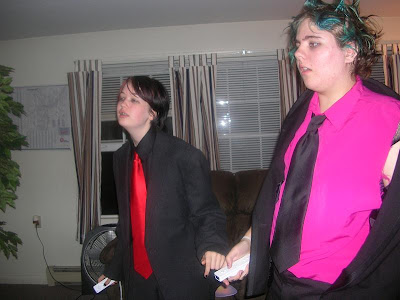 Cate's back over for the night but is sleeping soundly while Amanda washes the spiking gel, glue, and freezing spray out of her hair. I'm ready to call it a night myself but wanted to get this post up before I went to bed as I won't be able to post again until Monday evening due to my work schedule and didn't want you to think I'd fallen off the face of the earth. Saturday was just like that Cyndi Lauper song always said "Girls just wanna have fun." I think they did, at least it seemed like it!
Posted by Linda at 10/14/2007