The Umbrella Academy is in Session 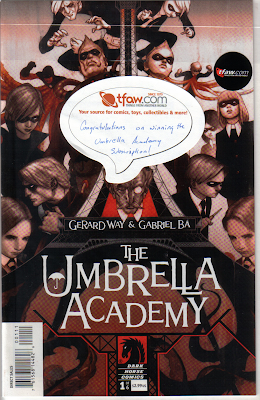 I think I may have mentioned in the past that Gerard Way, lead singer of My Chemical Romance, and one of Amanda's very favorite band members out there is also an artist who has his own comic book series now in publication. If I failed to mention that somewhere along the way I am totally surprised! Gerard was actually working in the comic book industry in New York City before co-founding My Chem with his brother Mikey so having his own comic book series has always been a dream of his.

The name of the six-volume series is The Umbrella Academy and though he doesn't do his own illustrations due to the time constraints of being on the road touring pretty much all of the time, Gerard is writing the series for Dark Horse Comics with the illustrations being done by Gabriel Bá, a comic book artist who has made quite a name for himself on the Image Comics cult hit “Casanova.”

The comic series features a foster family of seven superheroes who were all adopted and brought together by a cold-hearted alien foster-father, Dr. Reginald Hargreeves, whose death has brought them all back together nine years later. Unfortunately, the family is just as dysfunctional as they are super so they run into quite a few trials and tribulations while trying to save the world. Sounds like something Amanda would just love to read, doesn't it?

That was my thought exactly so awhile back - quite awhile back! - I pre-ordered the first volume which was due to hit the stores on September 19th. The preview edition had come out on Free Comic Book Day, May 5th, and of course Amanda had a copy of that but I was pretty sure she was going to want the whole series. Call it a mother's instinct if you will!

Imagine my surprise - and delight - when I got an email from Josh Christiansen from the Online Marketing Department at Things From Another World, the online comic book shop that I had pre-ordered the first issue from, on September 19th telling me that I had won a free subscription to The Umbrella Academy. Apparently when I pre-ordered The Umbrella Academy: Apocalypse Suite #1 I was entered into a contest along with everyone else who pre-ordered and I actually won! Me - who never wins anything - won a contest I didn't even know I had entered!

Because it took me forever to write this post, Amanda received the first volume quite some time ago and is now anxiously awaiting Volume #2 which is due to be released tomorrow. Even though I'm not much of a comic book reader myself anymore (I used to love them as a kid), I think this is pretty darned cool!