The Mo Show Comes to Connecticut!

********************
I have got a ton of things to do today - and I do mean a ton - so why on earth am I sitting here at the computer?? Today is the day that Mo arrives from Michigan and I will be going to the train station in Springfield, Massachusetts to meet him along with Miss Maggie Moo around 5:30 this evening. Woohoo!

Originally Mags and I had planned on driving out to Michigan to meet Mo in his own element but I had some trouble getting the time off from work (go figure!) so hit upon the idea that instead maybe Mo could take a much-deserved vacation from life at The Wren's Nest and come out here to visit us. After some cajoling and coercing, Mo agreed and he boarded an Amtrak train yesterday to start his journey.

First stop was in Chicago where he had a ten-hour layover but it sounds like he was rather enjoying it as I had an email from him last night as he sipped an iced Cafe Americano at a Häagen-Dazs internet cafe on Navy Pier while doing some people watching. It sounded heavenly to me and I hope that Mo was able to tear himself away and get back on the train like he was supposed to!

I will be heading up to Mags' house later today to join up with her before we head further north to meet Mo's train. After that we're going back to Mags' so that Mo can freshen up before we do an evening tour of Hartford (the Capitol Building lights up real purty at night!) and then go back to Mags' for the night. She has planned some scrumptious Hors d’œuvres and no doubt we will spend a good part of the night talking and laughing and just getting to know each other better.

After a sleepover we'll be taking a trip south from Mags' to an area that runs along the Connecticut River near Gillette's Castle, which is a twenty four room mansion reminiscent of a medieval castle which was purchased by the State of Connecticut in 1943 and subsequently became a State Park. 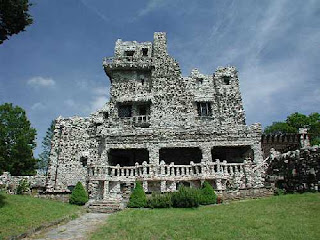 Built by William Gillette, a noted actor, director, and playwright who was also a descendant of Thomas Hooker, the founder of Hartford, the castle was built of local fieldstone supported by a steel framework which took twenty men a total of five years (1914-1919) to complete the main structure. In his semi-retirement, Gillette supervised the craftsmen who labored over the woodwork within the castle, which is made of hand-hewn southern white oak. Of the forty-seven doors within the structure there are no two exactly the same and each door has a handsome external latch intricately carved of wood. Even the Castle's furnishings are indications of Gillette's inspirations. The built-in couches, a movable table on tracks, and light switches of carved wood all point to his creative genius.

I haven't been to Gillette's Castle since my beloved grandfather took me there many, many, many years ago so I am really looking forward to seeing it again tomorrow. After our tour of the castle we're just going to wander the countryside a bit, catch a light lunch at a local tavern that Mags knows about (this area is her old stomping grounds) and then we'll eventually head back to her house for a feast that will no doubt show off Mags' newly graduated culinary talents.

Once I've eaten way too much I'll head home but will then meet up with Mo and Mags again on Sunday evening after they've spent the day eating clam cakes in Rhode Island and checking out the Atlantic Ocean. We plan on hitting the Mohegan Sun Casino on Sunday evening for dinner and who knows what else before I bid a final farewell to Mo as that's the last of him I'll see on his trip here.

I think we're going to have a wonderful time despite the fact that the New England weather has decided to, once again, not cooperate! It's supposed to be a nice cool 60 degrees here now but they are forecasting temperatures in the mid-80's for this weekend - ugh!! It seems like summer will just NOT go away this year despite the fact that it's been fall for several weeks now. Oh well, whatchagonnado??

Anyhow, I still have that ton of stuff to do so I had best get to it because it's 12:00 already and time is flying by! If I don't get the chance to write much this weekend, it's because I'm out having a good time with some fellow bloggers but trust me - there will be posts and, I'm sure, pictures to come.