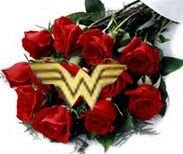 My friend Maddy from Whitterer-on-Autism, whom I am in awe of and admire greatly, presented me with the lovely Wonder Woman Award seen above. I am totally flattered by this award as, coming from a woman who writes two blogs while raising two autistic sons and a daughter who seems to have taken on the role of the 'sensible one' in the household, it is quite the honor! My life seems pretty easy to handle compared to hers!

Being the ever curious type, I decided to try trace the award back to try to see where it had originated. The trail is as follows - Maddy got it from ...And Miles to Go Before We Sleep... who got it from Walking On who received it from Talk..to..Grams who was presented it by the Keiser Family who in turn were awarded it by When I In Awesome Wonder Consider All ... who was one of the original women to get the award from Chrissy's This and That where the award originated based on the post "My Wonder Wife" which was written by Chrissy's husband Jason. Whew!

Now it proudly resides on my blog and I am passing it on to the following Wonder Women:

To Jen of Mommy 911 who is probably wondering how she's going to get through this third pregnancy of hers unless her fatigue lets up while she's still juggling the two little ones at home, a husband who really, really, really likes the direct connect feature on his cell phone, and her job as an ambulance dispatcher;

To my favorite soon-to-be bestselling author Gale of Gem-osophy who is juggling a career, home-life, and her first novel that I can't wait to see in print and sitting on my bookshelf! With all that, it's a wonder she can get anything posted on her blog, too, but she does and I'm always happy to see something from Gale pop up on my Google Reader!;

To Gracie of Echoes of Grace because she has had one heck of a rough summer but with perseverance, inner strength, and faith she has overcome the obstacles that were in front of her and still stands tall. She is a true super hero in my book!

It was hard to pick just a couple people for this award as I believe that every woman is a Wonder Woman in her own right but I'm hoping that the three I chose will pass it on to others and that Jason's gift to his wife will keep on giving over and over throughout the Blogosphere.

Thank you, Maddy! You are truly a Wonder Woman to me!

Email ThisBlogThis!Share to TwitterShare to FacebookShare to Pinterest
Labels: awards