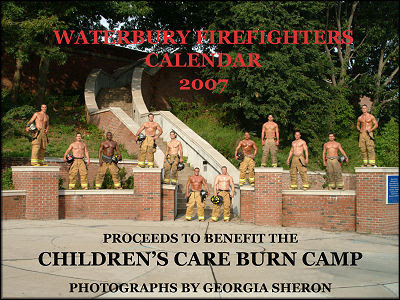 So ... I was sitting at work earlier today during a lull in dispatching wheel chair vans and answering 911 calls just staring at the calendar on the wall (and no, it looks nothing like the one above but I thought the 2007 Waterbury Firefighters Calendar added a nice touch to this post!) when I got to wondering about the name of this month - October.

You know how sometimes you look at a word and it just looks weird? Like a bunch of letters put together without rhyme or reason? Well, that's what I was thinking about October and I got to wondering what the name of the month actually meant because if the prefix "oct" normally means eight, how on earth did the tenth month of the year end up being something that had to do with eight?

Curiosity being the better part of valor, I decided to Google the origin of the names of the months and was somewhat surprised to find out that October really does come from the Latin octo "eight" + -ber (adj. suffix) which put together is the Latin october mensis or "eighth month". Okay ... but this is the tenth month of the year so how is it that our tenth month was originally the eighth month? What happened between the time the months were originally named and now? Further research uncovered that the original Roman calendar year had eight months and probably two unnamed months in the dead of winter when not much happened in agriculture. The year began in March (called Martius) until Numa Pompilius, the second king of Rome circa 700 BC, added the two months Januarius "January" and Februarius "February".

Pompilius also moved the beginning of the year from Marius to Januarius and changed the number of days in several months to make them into an odd number which was considered to be lucky. After Februarius there was occasionally an additional month of Intercalaris, "intercalendar", which had 27 days and is the origin of the leap-year day being in February.

In 46 BC, Julius Caesar decided he wanted to reform the Roman calendar (hence the Julian calendar) and he again changed the number of days in many months while removing Intercalaris completely. In the process he also renamed July, which had been known as Quintilis, the "fifth month", to Julius in order to honor himself. When Augustus Caesar clarified and completed the calendar reform started by Julius Caesar, he renamed the month of August after himself - Augustus; previously it had been known as Sextilis or the "sixth month". 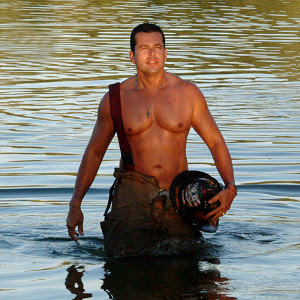 Speaking of August, this is Elac from the 2007 Waterbury Firefighters Calendar. I'm pretty sure that if this calendar were hanging on my wall, I have the sneaky feeling it would be August all year long even though it's not really my favorite month due to the nasty heat and humidity we usually get here in New England during that month. Still, it really is a nice picture ... such a soothing body of water ... with those lovely ripples ... uhm, anyway ... it was nice to learn something new at work today. Yesterday I learned that "the Civil War was won by the United States" when Kevin decided to crack on some of us for the horrible British accents we were attempting but I think I knew that already and I can guarantee you that Kevin will never, ever forget he said that either! Give that man a D&G watch as a prize!